Who Said ‘Tweaa’? – The Lesson 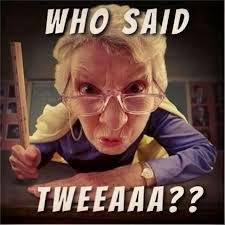 The Who Said ‘Tweaa’? story plus its associate funny posts which have for some time now gone viral on the social media is one incident we can take a cue from. This piece is neither to condemn the victim nor to scorn the incident, but rather to make an exposition so we learn a lesson or two.
Read another lesson  here
A good look at the video indicates that the District Chief Executive who angrily  stormed out of the durbar did so as a result of a remark made by an unidentified person (hence the question, “Who said ‘Tweaa’?”).
He fumes, ‘Am I your co-equal?’, ‘If you’re a hospital worker, who are you?’ and other utterances I find very unwholesome – POOR CONTROL OF TEMPER.
The man, who actually represents the President of the Republic at the district level failed to deal with one of the challenges of being a leader.
In the Good Book, Moses did a similar thing and that disqualified him from enjoying the fruits of the labour of his life. From his hay days till the day of his last breath, he had worked assiduously to see the Promised Land, but his quick temperament denied him that accomplishment.
Well, our DCE also lost his position, but gained a lot of public condemnation and ridicule. Have we learnt a lesson yet?
He simply had a bad temper, and in the end loses it all.
In the footage, I could spot a Chief at the gathering; in the company of other dignitaries. Yet the angry man walked out on him. How bad! How unfortunate!
He simply could have smiled at the silly comment, or pretended he never heard it. And that is what good leaders do. Another lesson learnt?
Disgusting feedback is common and normal of subordinates. Thus, it takes that mature leader to tolerate. If you are or aspire to be a shepherd of men, a public figure or a celebrity; always learn to act appropriately in the face irritations.
Well, I’ve ended my speech. I’m not talking again. You can choose to consider my message or not. If you won’t, get lost! Am I your co-equal? Tweaaa!
See who said ‘Tweaa’ here
Watch the video here