Artistic Work On The Rebranded Buses Is Expensive, And So Is Trust

Government has spent GHC 3,694,044 on rebranding 116 buses for Metro Mass Transit. This came to the notice of the minority leader when he finds a report from the finance ministry on how Ghana’s petroleum expenditure had been disbursed across the various sectors of the economy.
In a response to this development which caused a stir-up among the general public, Dzifa Attivor the Transport Minister says ‘Artistic work is generally expensive’, so such expenses are justifiable. And we also have people defending this unethical deal. So it became necessary to put into the witness box of the court of public opinion the minister’s comment together with the said government project. 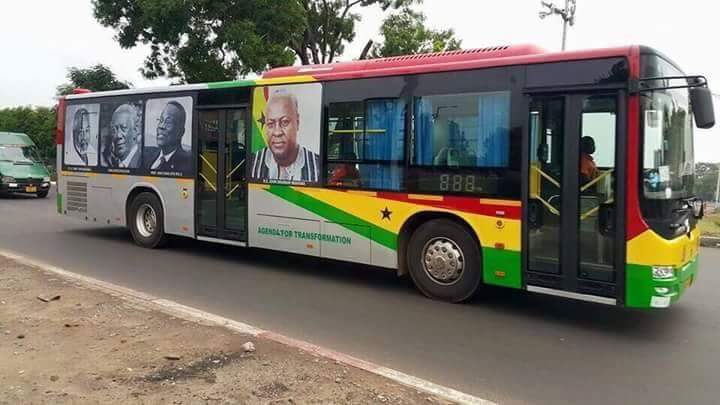 Now let’s do this…
The matter is bizarre and complicated. It beats the mind how people could pull off such stunts with justifications.  If this is not another prospect to create, loot and share but rather a joke, then we are finding it difficult to laugh over this comedy, because it’s not anymore funny.
Word on the streets is that, instead of placing on the buses the heads of John Mahama and the ex-Presidents, we could have sold advert spaces to companies and organisations to earn huge sums of revenue. We therefore wonder how people with master’s degrees will clad in suits and ease in air conditioners with their lives plastered on good conditions of service but will fail to nurture such ideas.
Did we need this? Couldn’t that sum be channelled into acquisition of new buses? Here in Ghana under Kufuor’s administration, it’s happened before. We have had several organisations and companies pay to sell their products, services and concepts on these high visibility buses.
With taxpayer’s money, the government bought 116 of these buses meant to run several routes of the country whiles most of them are still stationary at the Parliament House. Meanwhile this a fantastic business in parts of the world like London, but is rather made a board for pushing the agenda of the sitting political party.
The lame excuse from the Transport Minister is, covering the buses with stickers is someone’s artwork and that alone should be enough to justify any amount spent. ‘Artwork is generally expensive’, but what the minister fails to acknowledge is that there’s something as expensive as the President’s photo – TRUST.
Barack Obama said, ‘If the people cannot trust their government to do the job for which it exists, to protect them and to promote their common welfare – all else is lost’.
Art work is displayed in a museum where it gets preservation and protection. So if you had an art to promote, it did not need to be exposed to the mercies of street dust. The President and his appointees really need a lecture on preservation, as the ideal portions of this government’s administration including its credibility have been derailed.
If we survive the harsh conditions of the economy and pay taxes through hustle, just to be slapped with such immature, shallow-thought, corruption-rich projects, it only means that something has been thrown to the dogs. What happened to conscience and the fear of the God to which our officials swear is a matter we will reserve for another day.
For a government to spend 3.6 million of our oil revenue to rebrand buses in the face of an economic challenge is a misplaced priority. You owe workers millions of cedis, you can’t provide even chalks in schools, our securities owe millions of cedis of utilities, there’s no job creation but your priority is to rebrand buses at an absurd cost? Pupils still school under trees. 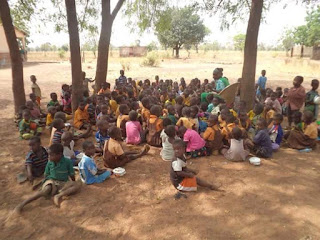 We live in a country where citizens have slept in darkness for 5 years without an effective solution. Ghana Gas is expected to shut down its operations this month. Teachers’ allowance is scrapped off because it has lost its relevance, meanwhile painting a bus to the advantage of one political party is pertinent. Government is failing to pay GHC 105 million debt owed some local construction firms and rendering Ghanaians jobless, but pictures that should have been printed on basic school text books have ended on the doors of buses at exorbitant prices. 3.6 million cedis worth of artwork to ply on poor dilapidated roads is a big shame to the government.
Yeah, someone is indeed working for us, and the height of transformation is at its appreciable peak!
Inflated cost of items is a penchant of this government. The labour for pasting the stickers on MMT buses cost GHC 100 per bus, but the company charged the state GHC 2,000 per bus. This corruption is legendary. Someone’s head must roll. Someone needs to answer questions. It isn’t the masses – we get to answer ours behind the ballot box. 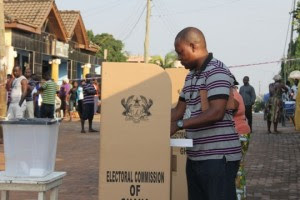 Was this contract put to tender? How did such project see realisation without scrutiny and due approval from parliament? How does the Chief of Staff want to tell Ghanaians that he had no clue about this until now that he’s calling for an investigation into the matter?
If officials are diseased with malfeasance and are a reflection of the ills of society, what then is the need for leadership? Paa Kwesi Nduom is asking, ‘What happened to moral authority’?
We don’t trust the Mahama-led government and the porous system any longer. Ask Omane Boamah. He has his doubts too. He challenged the power minster’s promise to end dumsor the following week and he won the bet. Your credibility has been tainted and we no more trust you.
Whiles in advanced countries, branding in real context must be accompanied with improvement in passenger safety and reliability of bus services, in our part of the world, rebranding means seeing the faces of people on vehicles bought out of national coffers. What does the hungry man on the streets need the heads of Presidents for?
Herbert Mensah wrote, ‘If you succeed in cheating someone, don’t think that person is a fool. Realise that trusted you much more than you deserved’
Maybe there’s no long term plan. Governance is about policies. President Kufuor set up the Metro Mass Transit to improve the transport system. That is policy. What is happening under the President’s watch is against the spirit of democracy and good governance. If there’s one thing for which we are disappointed today, it’s that we got ourselves in the hopes of your government. God himself who fixed the oil down there must have regretted. He doesn’t even trust us anymore.
Trust is like a mirror. Once it’s broken you can never look at it the same again.